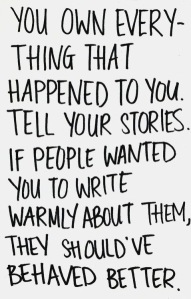 Five years ago in October, I confronted someone in a lie about me and instead of remorse, they attacked back. I was called names, belittled, told I was a bad mother and a “bad Christian,” which was a typical situation with this person. Then, in a final text I was told “I am done with you.”

Picture with me the many, many times this scenario has played out in the past. Years of mind games, gaslighting, triangulation amongst siblings and friends, flat out lies coming out years later, manipulation, confusion, emotional abuse, extreme conclusions without evidence, being used for status, for money, for lies…I could (and will eventually) go on.

Oy vey, it’s a frustrating story. But that’s more than an ending OR a beginning. Because that person is my “mother.”

When Rae approached me about contributing on her blog, she told me I could write about anything: parenting, foster…